History of the Depot

History of the San Carlos Depot

In the last column I mentioned there will be a very special event at the Depot on Sept. 28. We will be celebrating the “discovery” of our sister station in San Carlos. These near twin depots share everything from their simultaneous design and construction to their undeniable ties to Stanford University – and the architectural stylings of Henry Hobson Richardson and Charles Coolidge.

We’ve explored our Kenwood history in depth, so it’s only fitting we now learn something about San Carlos and how the other end of this story unfolded.

The area surrounding San Carlos was the former Rancho de las Pulgas. Among those who would come to be a part of the Rancho legacy was Timothy Guy Phelps, former gold prospector, merchant, politician and first president of Southern Pacific Railroad under the ownership of the Big Four.

Phelps purchased 3,500 acres of Rancho land along the tracks of the new San Francisco to San Jose rail line with dreams of a new town which he would call “Phelps.” To that end he created plans and pursued his vision. But his vision, like his prospecting, would not pan out and in 1887 the San Carlos Land and Improvement Company, an arm of Southern Pacific, assumed his development plans and saw them through to completion.

At the helm of this organization was a Captain N. T. Smith, Treasurer of Southern Pacific and close friend of the Stanfords. Among the directors, was Arthur Brown Sr., Superintendent of Buildings and Bridges for the railroad, a most capable man we’ve learned much about in recent articles.

Crowning this project would be a depot, the finest in the state, the nucleus of a model suburban town. It was reported the depot would be of an architectural style inspired by the state’s early Spanish heritage.

In fact the architecture was Richardsonian Romanesque created by the recently deceased Henry Hobson Richardson of Boston. Richardson’s firm, continuing under the guidance of Charles Coolidge, was at that time under contract with Leland and Jane Stanford to design the buildings of Stanford University.

It is believed that Leland Stanford, at Smith’s request, asked Coolidge to oversee the design of the San Carlos Depot. Coolidge’s firm had a long history of depot design in the Northeast. Arthur Brown, an accomplished architect in his own right, could well have done the actual drawings with guidance from Coolidge. Brown was already supervising the construction of the university buildings working closely with Coolidge.

Strangely, no architectural credits exist, but given the circumstantial evidence, it’s unimaginable that the depots of San Carlos – and Los Guilicos – were not Coolidge products to at least a great degree. 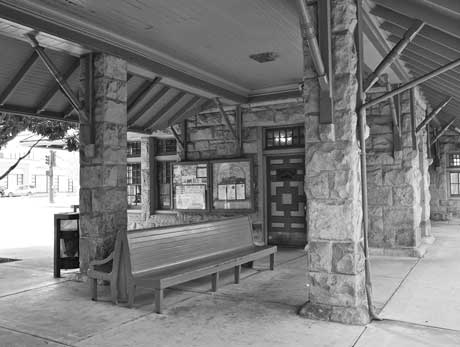 As the two depots are virtually mirror images of one another, so too was the early fate of their respective communities. Real estate was in a down cycle and neither development caught the fancy of elite investors as was expected. San Carlos eventually recovered in the early 1900s but Los Guilicos (Kenwood) would never see its intended glory – for which we are eternally grateful.

An active station until the mid 1960s, the San Carlos Depot today serves only as a shelter for Cal Train commuters. The rails have been elevated and the surrounding area developed, leaving the historic depot appearing stranded in the twenty-first century. But to its enduring credit it still commands its surroundings.

I strongly suggest that on your next trip south of San Francisco on 101, you take a few minutes and visit this remarkable building. It houses a small cafe where you might plan on lunch, but the real treat will be to see and touch this living, breathing sister to our own remarkable building. If you’re from Kenwood, I guarantee you’ll feel an immediate bond.